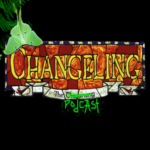 Greets and welcomes! So, if you’re here, you were either looking for Changeling: the Podcast, or you weren’t. If it’s the former, success! If it’s the latter, we hope you’ll stick around and peruse for a bit, at least! This is our first podcast and first attempt at show notes (eek); let’s see how this goes.

But anyway, this is a podcast about Changeling: the Dreaming, a TTRPG (tabletop roleplaying game) first produced by White Wolf in the 1990s/early 2000s, then Onyx Path in the late 2010s, and currently dormant until its next incarnation. It’s about faerie souls in human bodies trying to make it in a bleaker version of our modern world (a.k.a. the World of Darkness), trying to keep wonder, adventure, magic, dreams, and nightmares alive in spite of the slow erosion of belief. We’ll be tracing the history of the game from its earliest days to its ever-tenuous present, with deep dives into the sourcebooks, discussions about Topics of Import, interviews with other fans/figures in the Changeling-verse, and whatever else we can come up with. Come for the Glamour, stay for the vibes.

This episode is mostly us talking about ourselves, our love of the game (and other games), and various tidbits to whet your appetite for future episodes. It was as much a mic test as anything else; we’ll forgive you if you skip it. But then you might never know mysterious factoids about our origins…!

Josh Hillerup is a long-time gamer, LARPer and Changeling aficionado based out of Canada…

Pooka G (any pronoun/they) started with RPGs by sneaking a look at the D&D red box one afternoon and making a character before anyone could stop them. They discovered Changeling as a young teen, joined some Internet forums on the subject, and it was all downhill from there. When not writing homebrew supplements, turning up for a session now and then, or ranting about games on Discord, they devour anything and everything to do with language like some kind of lexical redcap, and skulk the dimly-lit corners of Northeastern U.S. bookstores and alleyways like some kind of typical sluagh.

This podcast was pretty directly inspired by a few others, so credit where credit’s due:

“The world is full of painful stories. Sometimes it seems as though there aren’t any other kind and yet I found myself thinking how beautiful that glint of water was through the trees.“
—Octavia Butler, Parable of the Sower

(psst! email us at podcast@changelingthepodcast.com if you want)